There are some pieces which speak to us more than others.  Here you will find a little bit of history of each piece and what makes them special to us.  Check back often for new additions! 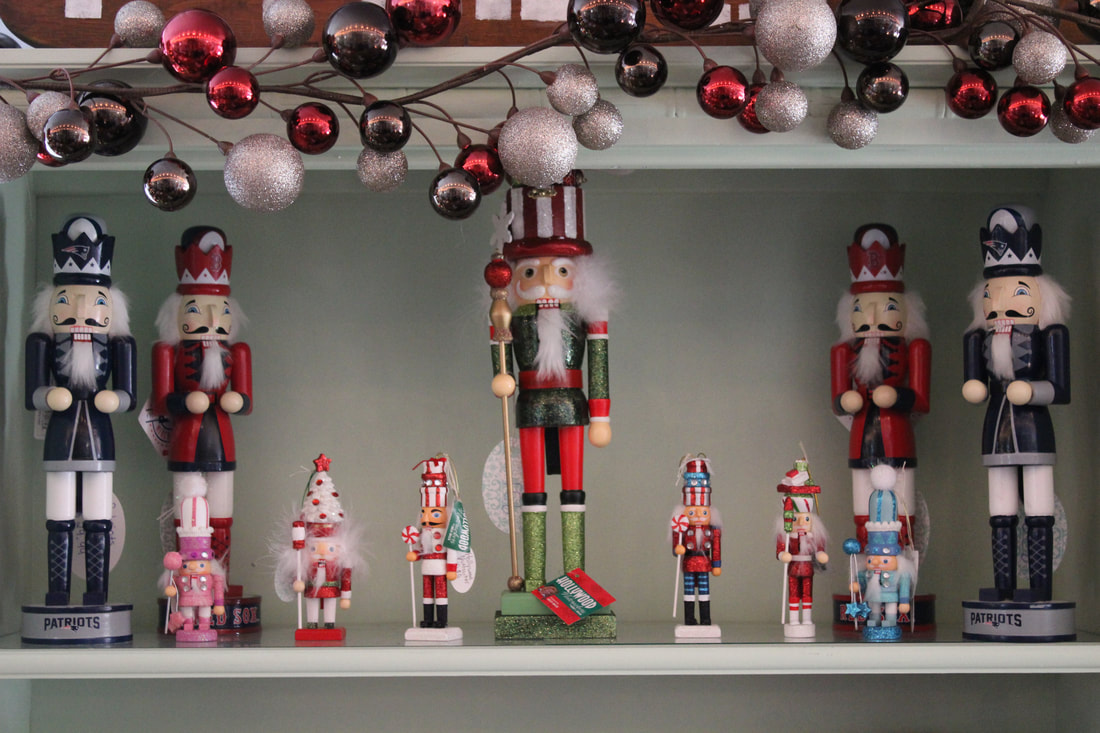 We love unique pieces, that's something that we've said time and time again.  And the Hollywood Nutcracker does not disappoint.  Each one is designed by Holly R. Adler, who has been giving us these whimsical Nutcrackers for over 30 years.  Holly began designing for Kurt Adler at the end of the 20th century.  She took a traditional signature Christmas decoration, which began in German cottages in the 15th century, and infused her own style, with an emphasis on contemporary trends, but stayed true to traditional techniques.

Holly has done what we appreciate, taken a piece with strong bones and given it her own flare.  On her Nutcrackers, you'll find bright colors, glitter and tufts of white hair with lots of sparkle.  In her line, you'll find pirates and snow princesses, wizards and bakers along with Nutcrackers with a twist.

For more information, check out: ​http://www.kurtadler.com/department/3023 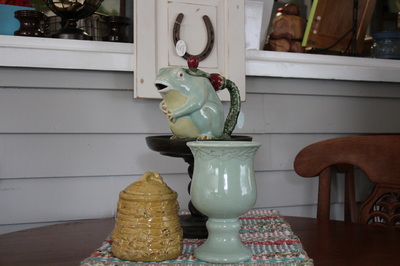 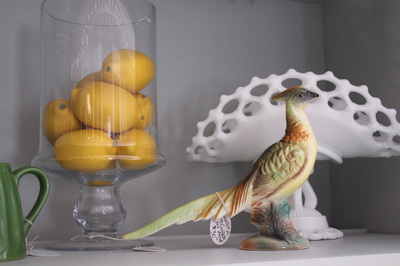 ​We came across these two pieces and instantly recognized them as collector’s item.  Now, you may be wandering what makes them collector’s items.  Are they vintage?  Is it the color?  Were they used on the Queen’s table?  All of these may be true, but what makes them highly collectible is that they are Majolica pieces.  Majolica is a pottery which uses an opaque white glaze on an earthenware clay piece, and  then is stained or glazed, and then finally fired.  The Majolica technique has an Italian origin and was first produced in Faenza, Italy.  This technique and style dates all the way back to the 8th century, with the Moorish invasion of Spain.  It was also found throughout the Middle East in the 9th century.

For more information, check out: http://pottery.about.com/od/potteryglossarykp/g/majolica.htm 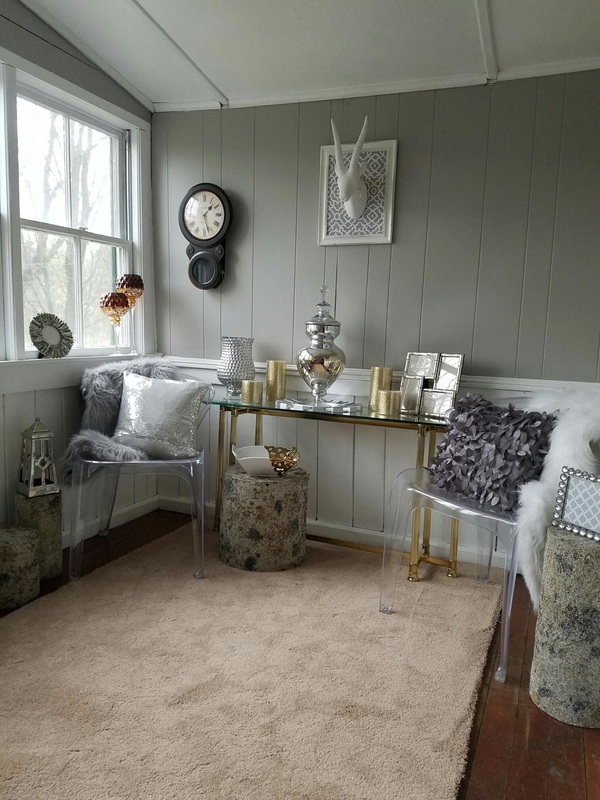 What a find these were!  These award winning chairs have are nothing short of what we expect of Heller.  They are aggressive in their design, it exemplifies the simple mod design which Heller is known for.  What makes it unique is that it is an injection molded stacking chair, but what is even more to be envied is that it has landed a permanent spot in the Museum of Modern Art's Permanent Collection, and won the 2003 ID Annual Design Review Design Distinction Award.  It is also exhibited at the Metropolitan Museum of Fine Art.  Not only is it practical (it can be stacked for easy storage), but it also brings high quality design to anyone who seeks it. 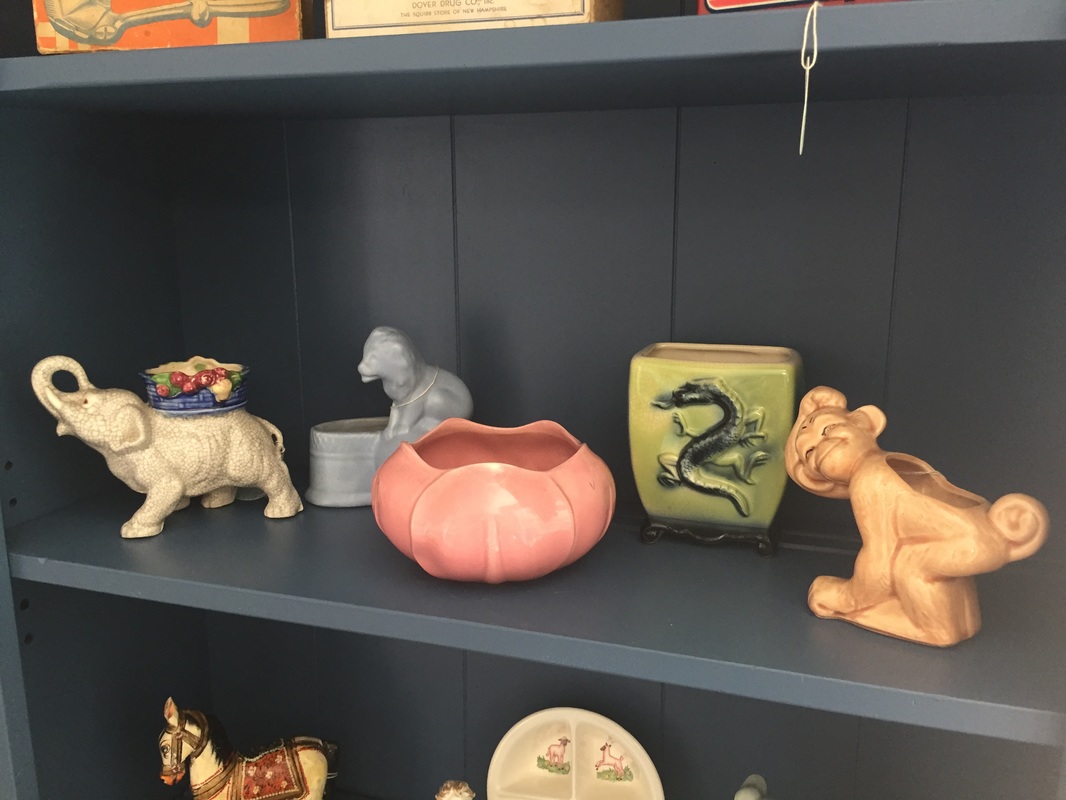 As you have guessed, mid 20th century is an era which we love for its style and creations!  These planters fit right into that time frame.  These antique McCoy planters were used throughout households in the United States.  Nelson and J.W. McCoy founded the Nelson McCoy Sanitary and Stoneware Company in Roseville, Ohio in 1920.  But they did not start making art pottery until after 1926.  In 1933 they changed their name to the Nelson McCoy Pottery Company.  The company continued to make pottery pieces until 1990, when the company closed for good.  Since 1991, the McCoy mark has been made by unrelated firms. 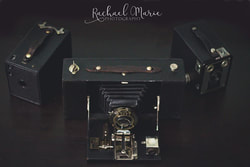 ​Do we have any photography enthusiasts out there?  Then this “Collector’s Corner” post is right up your alley!!  We were super excited when we came across these three vintage cameras, from left to right: No. 2 Brownie camera by Kodak, No. 3a Folding Brownie Camera by Kodak and the Kodak Brownie Target Six-20 camera!  To start off with, the No. 2 Brownie camera by Kodak has its claim to fame in that it was the first camera to use 120 roll film (remember roll film? And having to send your film off to be developed?  We sure do!)  It started off with a leatherette cover, but changed to a metal box cover starting in 1924.  It was introduced in 1901 and discontinued in 1935 and it ranged from $2.00-2.75.  Our next amazing vintage item is the No. 3a Folding Brownie Camera, also by Kodak.  It was introduced 3 years after the No.2 Brownie camera (1904) and was the cheapest of the Kodak folding cameras.  Most of these cameras were made between 1909 and 1915, with 114,000 being sold.  Our final vintage find is the Kodak Brownie Target Six-20 camera.  This camera was primarily “targeted” (see what we did there ;)) in North America.   It was first introduced in April of 1941 and discontinued in 1946 and the original price was $2.75!  What’s exciting about this camera is, that because of its use of 620 film size, it is still operable today! 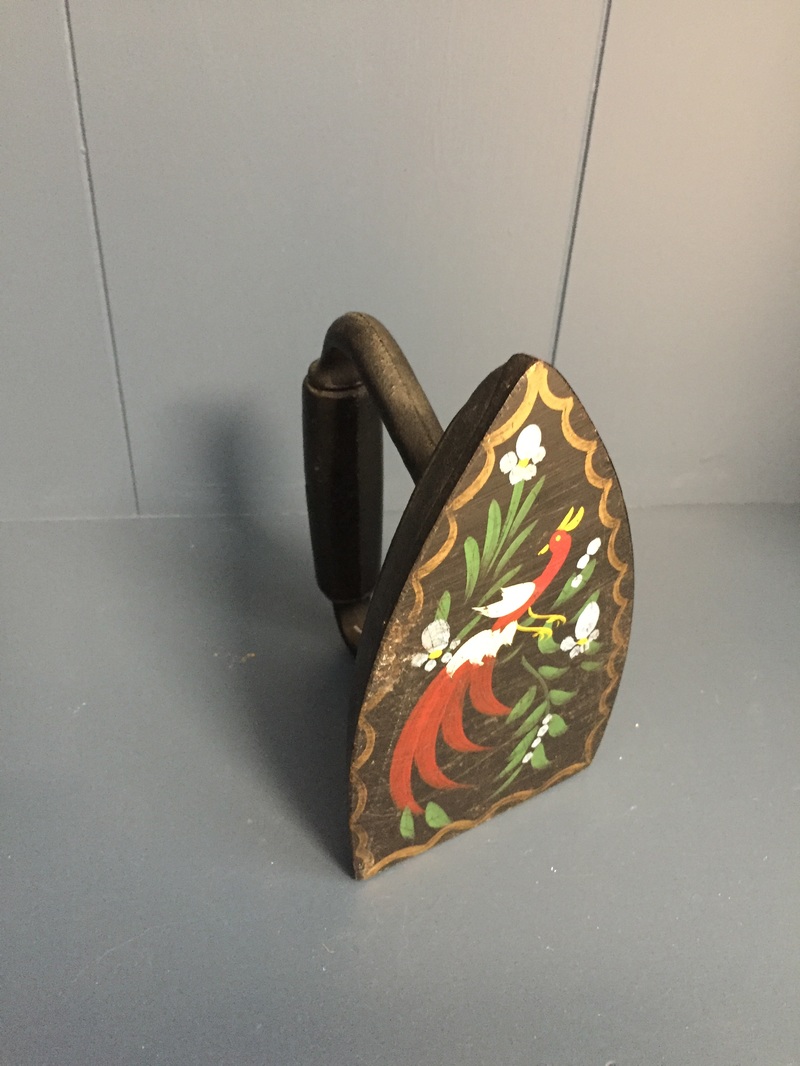 If you're looking for a workout, just do some arm lifts with this sad iron!  Weighing between 5-9 lbs, "sad" was an Old English word that meant "solid".  It was used for many of the same reasons we use our irons today, to smooth out wrinkles and put in creases.  Dating all the way to the Middle Ages, sad irons came to a triangular point at the front to make maneuvering around buttons easier.  They often rested on metal trivets and the heat was held in the heft of the iron.  Europeans encountered the idea of using heat to take the wrinkles out of clothes from trade with the Chinese, who had been using this technique.  This piece was not meant to be used, but rather to be admired as a home decor piece.  Tole artwork was brought to the United States by German immigrant farmers (primarily in Pennsylvania), who would paint their kitchen and domestic wares with this style. 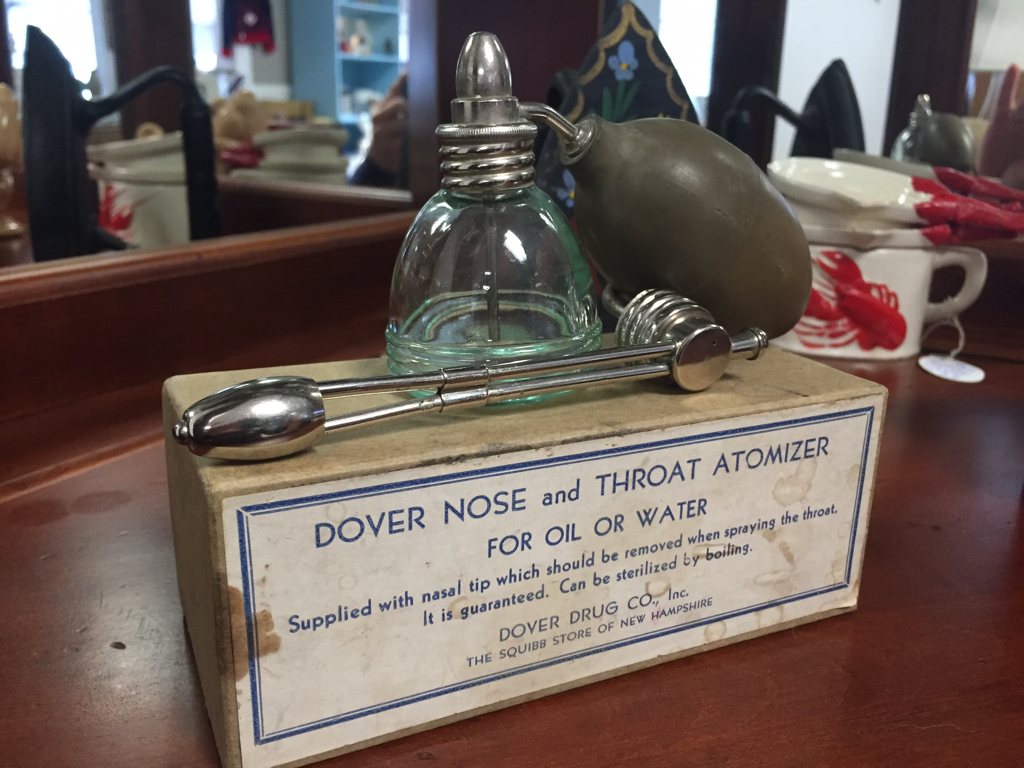 This is a fun piece to look at in order to compare the old with the new.  This piece, produced by the Dover Drug Company of New Hampshire, was a regular piece in many households.  Think of it as a really old nasal spray, except you would provide the oil or water, put it into the bulb and spray it into the nasal cavity or throat, depending on where the ailment was.  The oil or water solution would be prescribed by a doctor and is a perfect collector's piece for any vintage medicinal and pharmaceutical enthusiast. ​ 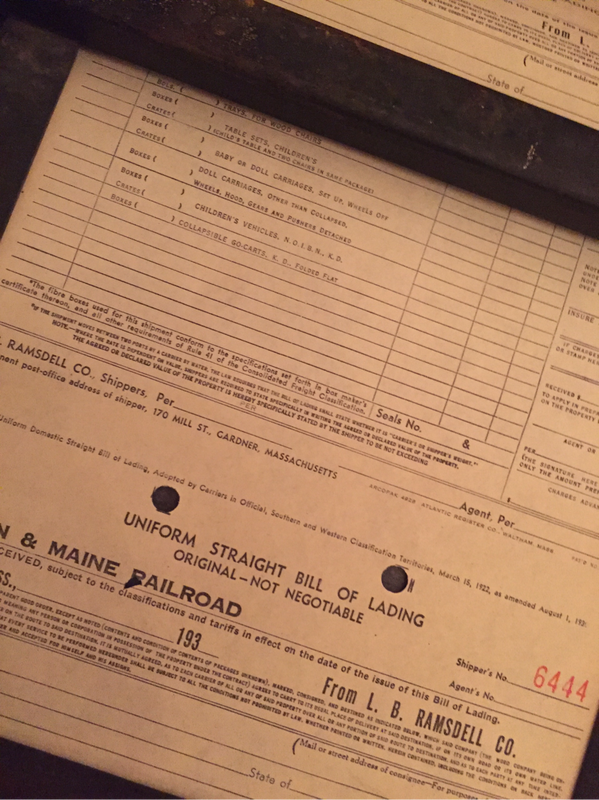 Before our interstate highway system, which was expanded in the 1950s, our railway system was the way to go for shipping and travel.  The Boston and Maine Railroad, at its height, serviced hundreds of  towns in Connecticut, New Hampshire, Massachusetts, Vermont, New York and Maine and employed 28,000 people.  The B&M Railroad helped isolated New England towns gain access to metropolitan areas such as Boston and Portland.  One such company which took advantage of this vast network of railways was the L.B. Ramsdell company of Gardner, which specialized in the manufacturing of toys.  Mr. Ramsdell purchased the business in 1879, and by 1897 it was the biggest manufacturer of doll carriages in the United States.  We were over the moon excited when we found this receipt from the B&M Railroad for L.B. Ramsdell Co.  We couldn't wait to display this little piece of history and in our store!  We love when local history is able to come alive within our walls! 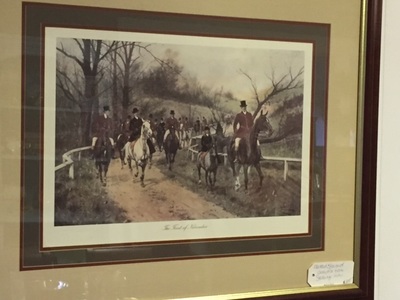 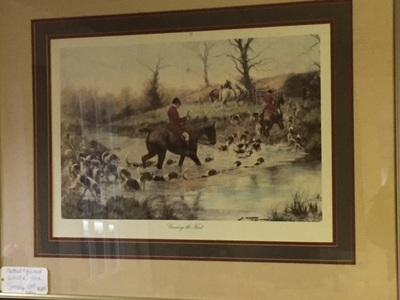 These two paintings came from the cherished Sterling Inn, located here in Sterling, MA.  The Sterling Inn most likely descended from the lodging house of 1759, close to the Conant Library.  Throughout the next 150 years, fires ravaged the Inn but it was rebuilt each time and in 1908 a Boston architect, Mr. G. Henri Desmond, rebuilt it in the style of the Arts and Crafts movement.  The Arts and Crafts movement emphasized colonial style.  In the early 20th century, it was considered a modern building in that it had electricity, spring water and steamed heat.  It also had a telephone, which was new during this time.  The Mahoneys were second generation owners of the Sterling Inn and recall that the 1930s were they heyday of the Sterling Inn, where people would come from as far as Boston to rent cars and drive around Mt. Wachusett.  These two paintings speak to this time and era, when regal and class were the distinction in high society. 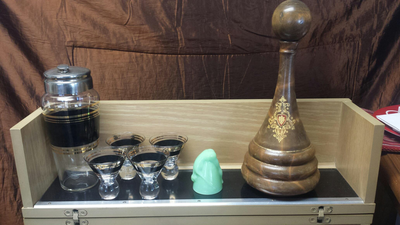 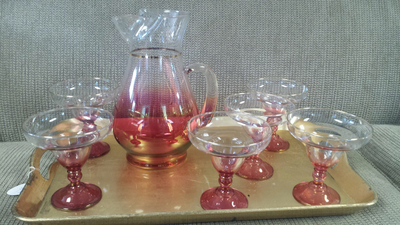 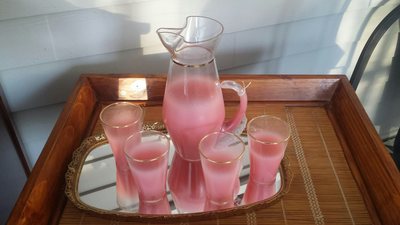 This week we're looking at Vintage Barware!! Continuing with the mid century modern theme, we have barware from this era. To begin with, we start with two glasses and pitcher set. The Blendo Lemonade/Ice Tea Set is distinguished by bright/neon pastel paste that fades as the glassware proceeds upward. This hits upon the mid century modern theme of bright colors that pop. Our next item is a 6 stemmed cordial glasses and pitcher set, with a raspberry iridescent ombre flash glass with gold edging. This set uses a raspberry color to help create that pop of color. We continue with the 1960s Atomic Barware Set with cocktail shaker and four shot glasses. Here we have clean lines that attract the eye.

Our focus is the McKee Bottoms Up Shot Glass is unique in concept and style. Created during the 1930s by the McKee Glass Company of Jeanette, Pennsylvania, this shot glass is their signature jadeite color with a female nude molded around the bottom of the glass. Since it has a curved bottom, the only way one could put it down was when the glass was empty and could be placed rim down. There are two versions of this shot glass, the first in which there is distance between the legs, produced in 1930-1931. The following year, in 1932, the McKee Glass Company took out a patent for a closed leg Bottoms Up Shot Glass. 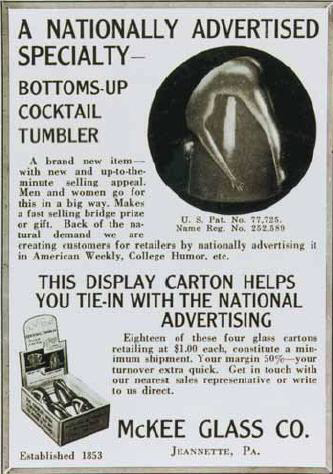 Mid Century Modern furniture was the style, mostly during the 1950s, but started in the 1930s and ended in the late 1960s (think Bond, James Bond, Mad Men and popular detective movies from the 1950s). The big names of Mid Century Modern are George Nelson, Edward Wormley and Eero Saarinen. Pieces by these luminaries can cost any collector a pretty penny today. But there are lesser known, yet still talented furniture makers, who focused on clean lines, popping color and unique materials which made Mid Century Modern furniture so distinctive from other styles. The colors were often the designers' expression for peace and hope for the future and the sleek lines were breaking away from the more complicated furniture of the pre-1930s era. Heywood Wakefield, a designer dedicated to Mid Century Modern, was a prestigious furniture company located in Gardner, MA. This original Heywood Wakefield is a perfect example of sleek lines and a vibrant original Champagne color and finish. It is stamped with the number "338" signifying the model number. 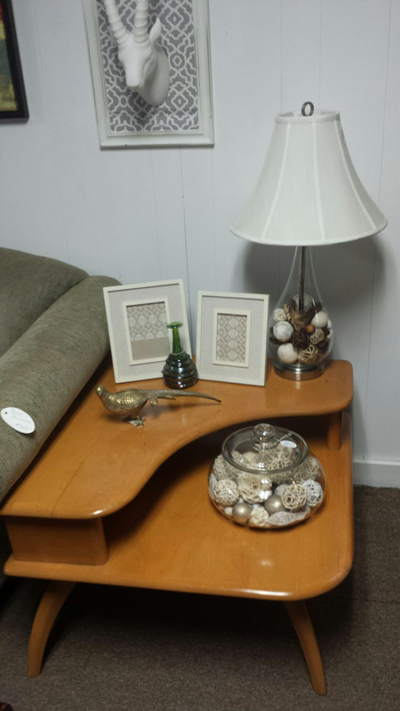 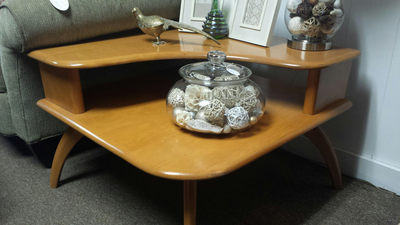 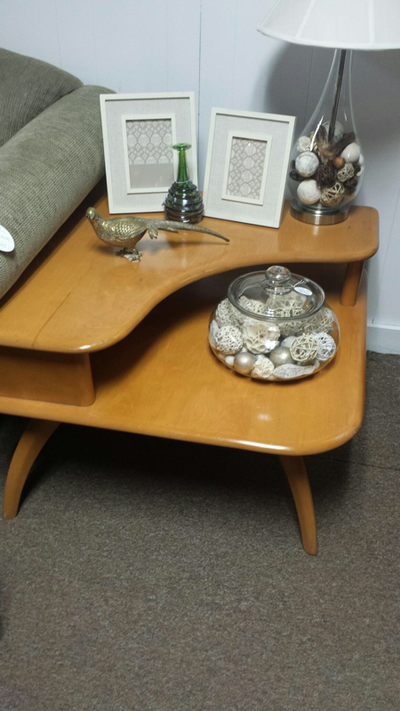 An original ad for the McKee Bottoms Up Shot Glass